So excited about my new play area!  It's the first time I've been able to design it!  Since just building the walls, doors and electrical were enough, I was on a budget for the rest of the room, so I tried to re-use what I could from the previous house.  After painting the room one of my favourite hues, (thanks again mom and Jim!)  I set to work preparing the shelves. The paint colour is the darkest here called Nautical by Valspar.  I was aiming to match the tone of the Ikea rolling carts that so many people have bought and I splurged on when we decided to move Sault Ste. Marie. (NO IKEA!!!!) 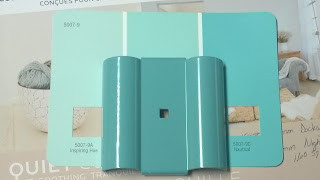 The shelves are from Ikea and I strongly recommend them for holding those 12x12 storage cases Michaels sells!  You can assemble the shelves so that there is just the right space for them!  Any way, here I have Jim cutting  down the posts from approximately 68" to 55".  Due to the ledge all around the room, I decided to try and keep everything storage below that line and keep the above for decorating.  I then stained them white to brighten them up.  Boy I was NOT prepared for the amount of time it took to do that job!!!  SO many shelves!  But the final result is pretty , so it was worth it.  Then assembly.  Jim was shocked at how fast I assembled them...  I HAD had 2 months of planning of measuring, so I was gung ho to get them up! 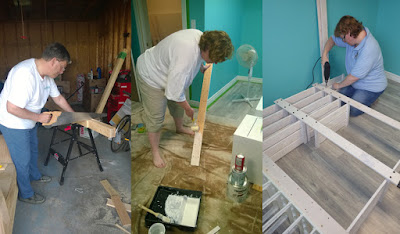 Then I started to unpack and make sure all important pieces would fit...  I originally had plans for a cozy corner where I could crochet or digital scrapbook in, but my chair proved to be too poufy for this space.  So adjustments were made...  The floors are a light gray laminate from Lowes that matches the tone of the carpets in the rest of the basement.  Gotta think future resale, right?

Come by tomorrow for the reveal of my new space.  Gotta warn you though, just the bones are done.  I've been sick for the past few weeks so not much finishing has been done.  I have time to do that part later this year!
Oh!  Yes!  Tomorrow's visitors will also be entered to win a set of paper cutting dies if they leave a comment on this blog... details tomorrow!  Hugs!
at July 14, 2016 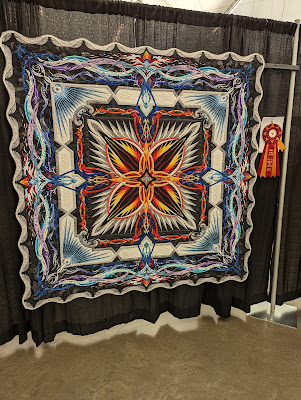